We Can Tell You! 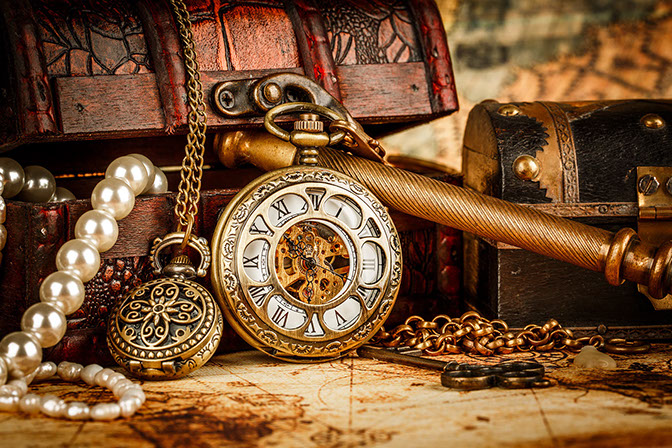 Do You Know What It’s Worth?

Appraisals can be exciting and challenging for everyone involved. The question of “What is it?” has to be answered before a qualified appraiser can begin to determine what it’s worth.

An item that’s old is not necessarily valuable, and values can fluctuate depending on a variety of factors. Something to remember – it’s important not to confuse sentimental value with actual monetary value. It’s best to consult a professional appraiser. 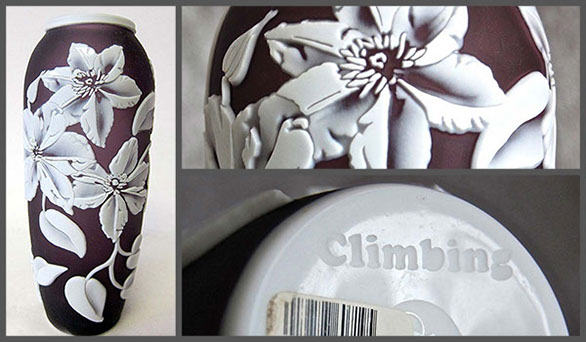 Limited Editions can be tricky things, so always make sure you love the piece you buy – they may or may not increase in value over time. That being said, collectors of milk glass will love this richly colored piece!

The design is a testament to the skill of the artists. High concentrations of Manganese added to molten glass provided a deep Aubergine color to the vase, which was then cased in Milk Glass. Each lush Clematis leaf and blooms floral vignette design was painstakingly sandcarved by hand, layer by layer, to achieve the remarkable depth and intricate details, making each vase a unique treasure.

The base includes the signature of artists Kelsey Murphy and Robert Bomkamp, the Fenton Script F USA logo and the name of the piece, ‘Climbing’, as well as the number of the piece.

The Fenton Art Glass Company is located in Williamstown, West Virginia, and ranks highly in the among the world's foremost producers of handmade art glass. The company was founded in 1905, and today it’s largest manufacturer of handmade colored glass in the United States. Fenton is well known for its innovative glass colors as well as handpainted decorations on pressed and blown glassware.

Condition: Excellent – no chipping or cracks

The first toy fire trucks were manufactured in the 1870s from cast iron and tinplate. Children loved them, and savvy companies rushed to produce their own versions.  While the looks and functions of fire engines and toy replicas have changed dramatically through the years, these types of toys have helped document the history of firefighting, and of course, they can all be quite collectible!

In 1945, Smith-Miller Toys began manufacturing fine quality cast metal trucks in Santa Monica, California. They were also known as “Smitty Toys and “M.I.C.” (derived from Miller-Ironson Corporation). Sadly, the company went out of business in the 1950s, but one persistent fan of the model trucks ended up buying the company, relaunching it in the 1980s as Smith-Miller, Inc. To date, the company has produced more than 75 limited editions of toy trucks. 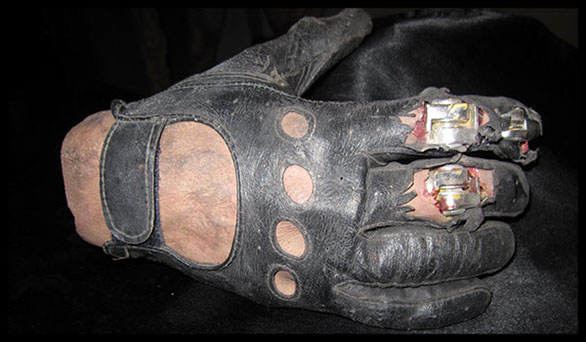 It’s the year 1991. Terminator 2: Judgment Day burst from the big screen to rave reviews, record crowds and spawned the ultimate Arnold Schwarzenegger line: “Hasta la vista, baby!” The groundbreaking special effects were unlike anything moviegoers had ever seen – and the Academy of Motion Pictures agreed.

The Terminator series remains one of the most successful movie franchises in history, with nearly $2 billion dollars in worldwide revenue to date.

The Terminator fanbase remains loyal, and there is renewed interest growing with the announcement of new movies in 2017 and 2018. This bodes well for one collector we’ve worked with, indeed! 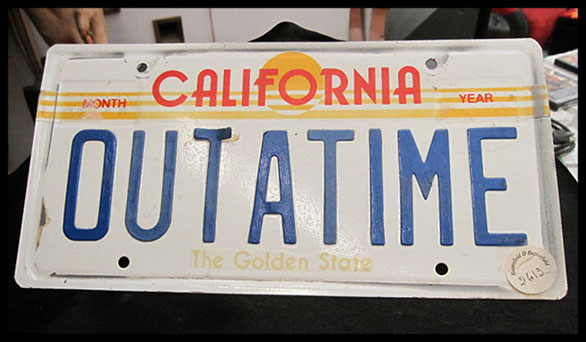 Back to the Future License Plate

Doing appraisals gives us the chance to see and handle items that have become cultural icons, and this is definitely one of them.

“Back to the Future” was the highest grossing film of 1985, and introduced us to Marty McFly – as played by Michael J. Fox – and Dr. Emmett Brown, “Doc”, played by Christopher Lloyd. That being said, one of the biggest stars of the movie was a DeLorean car (a collector’s item in itself)!

Marty McFly: Wait a minute. Wait a minute, Doc. Ah…are you telling me that you built a time machine…out of a DeLorean?

Dr. Emmett Brown: The way I see it, if you’re gonna build a time machine into a car, why not do it with some style?

The “OUTATIME” vanity plate for the DeLorean was handmade by the Special Effects Department of Universal Pictures, and was highly visible in the movie. The colorful California license plate features blue lettering adhered to a metal license plate. Dimensions 12” x 6”. 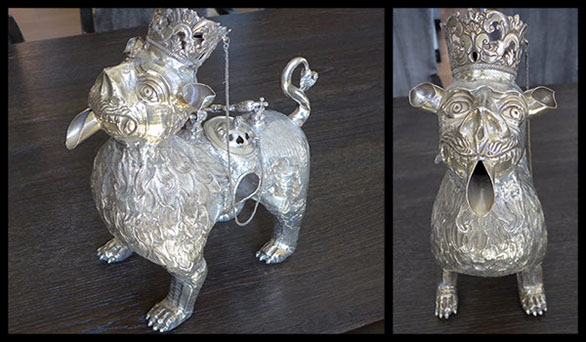 Aquamanile combines the Latin words for water (aqua) and hands (manus) to describe an animal- or human-shaped jug or ewer that holds water for ritual hand washing. Aquamaniles were important items used in religious and secular rituals through the ages, as well as status symbols for nobility. Early nobility and monasteries also incorporated hand washing at the beginning and end of daily meals. The earliest aquamanilia were made of pottery, so very few examples survive.

This highly detailed aquaminile from Spanish Colonial Peru takes the form of a lion, which is a symbol of strength in many cultures. The lion may also represent Christ, the “King of Kings” or a noble king. While it may have originally held water, the receptacle on the side shows that it was most likely adapted to hold perfume or burn incense.

Back to the Future

What Our Customers Say

"Dealing with a time sensitive estate settlement issue can daunting, but Marco and his associate Judith at Scottsdale Appraisal Specialists made the process as easy as possible.”

"When my home was flooded, Scottsdale Appraisal Specialists handled my insurance loss claim with unparalleled professionalism. With more than one million dollars in damage to my property, exceptional attention to detail was critical for assessing all facets of the claim.

The entire process was handled with a level of uncompromising integrity. The team at Scottsdale Appraisal Specialists are a pleasure to work with, even under less than desirable circumstances."

"We had several pieces of furniture and antiques that were damaged during our move to Arizona. Our moving company said we needed an appraisal and that’s when I contacted Marco at Scottsdale Appraisal Specialists. Marco and his associate Judith made a detailed inventory of the contents and supplied us with two bound appraisal reports with photographs, which made our insurance claim much easier."

Arizona. Out of state appraisals can also be easily arranged.